The Sule Lamido University (SLU) Kafin Hausa, Jigawa State, has matriculated a total of 948 undergraduates drawn from the three Faculties of Education, Humanities and Natural and Applied Sciences at the 6th Matriculation Ceremony of the University for the 2019/2020 Academic Session. The event which took place at Hall ‘B’ in the University Campus featured the speech of the Vice-Chancellor of the University Professor Lawan Sani Taura who disclosed that a total of 970 students were admitted out of which Faculty of Education has 227, Faculty of Humanities 427 and Faculty of Natural and Applied Sciences with 319 students. Professor Taura added that it was out of this number that 948 completed their registration and are now considered bonafide members of the University Community.

The Vice-Chancellor then urged the newly matriculated students to restrain themselves from all vices such as examination misconduct, theft, cultism, drug abuse and absenteeism and always refer to the Students’ Handbook as it contains all the do’s and don’ts in the University. Professor Taura also listed some modest achievements of the University which includes the graduation of 774 students in the five sessions of its existence and conduct of several Public Lectures the recent of which was organized by the Department of Languages, Faculty of Humanities titled ‘Bikin Sallar Gani a Kasara Hausa: Jiya da Yau”, held on 7th November, 2019 among others.

After congratulating the students for their success in getting admitted into the University, the Vice-Chancellor also charged them to always refer to the Guidance and Counseling Unit of the University for further Advice and counseling.

The occasion was graced by the Registrar and Chief Executive, Joint Admissions and Matriculation Board (JAMB) Professor Ishaq O. Oloyede who was represented by the State Coordinator JAMB, Jigawa State, Alhaji Aminu Bello. The attendees include the Principal Officers and members of the University Management Team. 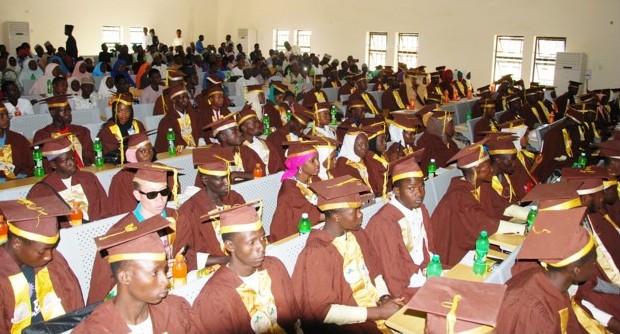 When in University Campus